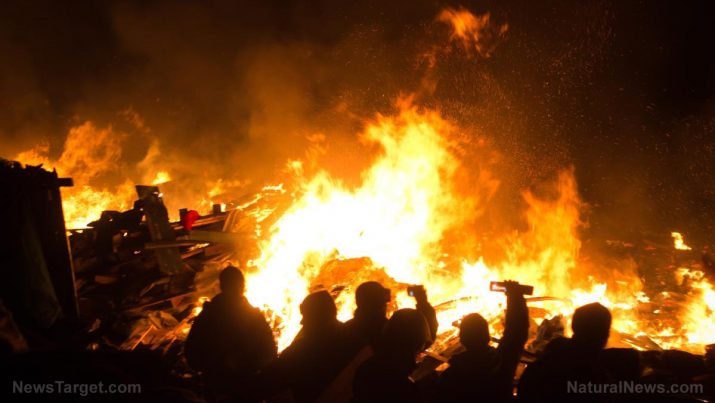 The Left-wing political establishment consisting of the Democratic Party and its sycophantic allies in the press have begun a dangerous process that will have disastrous consequences for the future of our republic: They have launched a campaign of fear, intimidation and violence against Republicans and conservatives in their bid to bring such behavior into the mainstream and turn it into the new normal.

As reported by The Daily Caller, the political environment is becoming increasingly hostile, and those on the Left are the antagonists. Consider several recent incidents as proof:

— Police in Tennessee recently arrested and charged a woman, Wendi Wright, with felony reckless endangerment for allegedly attempting to run U.S. Rep. David Kustoff, a Republican, off the road following a town hall event. Wright was outraged over the congressman’s stated support for an Obamacare replacement bill, the American Health Care Act, and screamed at him and his aide, Marianne Dunavant, eventually hitting his car windows and trying to grab them inside the vehicle.

— The same day as the incident in Tennessee, cops in North Dakota escorted an outraged man from another town hall event when he got physical with GOP Rep. Kevin Cramer, again over his support for the Republicans’ Obamacare replacement bill.

“Will the rich benefit from, if the health care is destroyed, do the rich get a tax break? Yes or no?” he shouted, using typical Left-wing Democratic talking points (which aren’t true, by the way). He then stuffed cash down Cramer’s collar shouting, “There you go, take it.” (RELATED: It’s time to start arresting, prosecuting and imprisoning the mindless, violent mobs on the left)

CNN host Poppy Harlow downplayed the physicality, reporting matter-of-factly, “This man showing his disgust with the congressman’s support of tax cuts for the wealthy, one part of the GOP plan right now.”

Unbelievable. Now, if Cramer were a Democrat there would have been media outrage.

On another note, you’ll notice that no Republican voters are showing up at Democrat town halls behaving stupidly and violently.

— In an article for the Huffington Post, Michaelangelo Signorile, the “Queer Voices Editor-at-Large,” actively called on people to harass Republican lawmakers wherever they are and wherever they go – in public and even at their homes, as if this is even remotely okay. He wrote:

Starting today and from here on, no elected official ― certainly those in the GOP defending and supporting Trump on a variety of issues, for example ― should be able to sit down for a nice, quiet lunch or dinner in a Washington, DC eatery or even in their own homes. They should be hounded by protestors everywhere, especially in public ― in restaurants, in shopping centers, in their districts, and yes, on the public property outside their homes and apartments, in Washington and back in their home states.

White House officials too ― those enabling the authoritarian ― need to be challenged everywhere, as do all those at the conservative think tanks who support Trump and those who publicly defend him in their columns and on television.

This is an open call for harassment and violence to be committed against elected officials who, in representing actual voters, are pursuing policies and legislation that Leftists don’t agree with, pure and simple. It is no more complex than that; they feel that just because they don’t agree, they somehow have a right to criminally disrupt the lives of those who hold opposing views. And yet they claim to be on the side of tolerance and understanding. It’s hypocrisy on steroids.

— As reported by Big League Politics, a bar in Portland, OR., is actually offering whiskey for life to any patron who punches Steve Bannon, President Donald J. Trump’s senior political strategist. The bar, called Paydirt, is printing the invitation on the bottom of its receipts.

“Imagine the outrage if someone on the right solicited violence against anyone in the Obama administration, they would immediately be branded domestic right-wing terrorists. Somehow, seemingly endless calls for violence against the Trump administration are not only acceptable among the left, it is celebrated,” the site noted. (RELATED: Berkeley Mayor Sides With The Unhinged Left-Wing Terrorists, Blaming Milo For The Violence)

The site also notes that it is a Class C or D felony under 18 U.S. Code to threaten public officials other than the president. Also, it’s against the law to solicit violence against public officials.

But this all just fine, see, because it’s Trump and Republicans, and since Leftists have ‘decided’ it’s alright, then it is alright.

Except that it’s not. It never has been.

Barring a law enforcement crackdown on these kinds of outrageous provocations, Republicans and conservatives will likely start pushing – and hitting – back. Count on it.