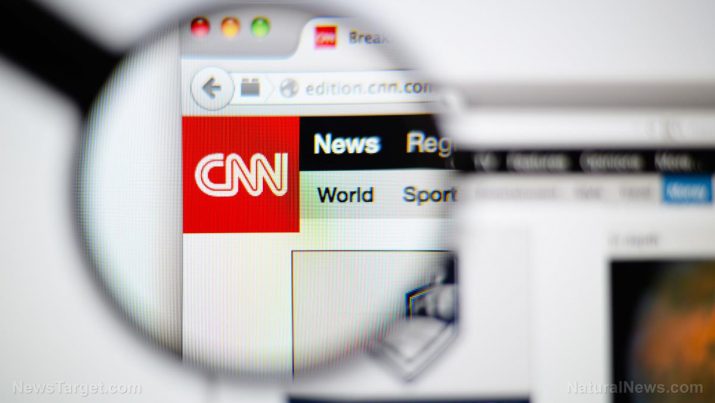 Just when you thought the wholly discredited “fake news” media couldn’t go any lower, CNN pulls out yet another sleaze tactic that smacks of the very same “journo-terrorism” I first warned about last year.

Over the July 4th holiday, CNN managed to acquire the identity of the Reddit user who created the hilarious Trump vs. CNN mock wrestling video that has taken the internet by storm. His Reddit username is HanAssHoleSolo, but CNN threatened to go public with his real name if he didn’t apologize for making the video, saying:

CNN is not publishing “HanAssholeSolo’s” name because he is a private citizen who has issued an extensive statement of apology… CNN reserves the right to publish his identity should any of that change.

And just like that, CNN went “full mafia” on a private citizen, invoking blackmail threats to expose the identity of this Reddit user who made a silly satire video. Maybe next the geniuses at CNN will also threaten 4Chan and Anonymous, just ‘cuz they’re stupid enough to think that might be an amazing idea.

We’re also seeing unconfirmed reports that CNN may have acquired the identity of the user by having its parent company, Time Warner, spy on the user’s internet activities the same way the NSA spies on everybody else. This is not yet confirmed, but given the sleaze tactics already invoked by CNN, nothing would surprise me at this point.

In any case, the backlash against CNN has been nothing short of epic:

“CNN and Andrew Kaczynski, head of the network’s Republican oppo research unit “KFILE,” gave a misleading defense after receiving an intense backlash to a Sunday night post boasting that he had tracked down and identified a man who claimed credit for a gif shared by President Donald Trump — and that CNN may reveal his identity if the man chooses to “repeat this ugly behavior'” reported Breitbart News:

Dozens of celebrities, commentators, politicians, and journalists criticized the network, all across the political spectrum — from Donald Trump Jr. to YouTuber Philip DeFranco to WikiLeaks to anti-Gamergate stalwart Brianna Wu. The hashtag #CNNBlackmail became the number one trending topic on Twitter, with many critics calling the sentence about CNN “reserving the right” to release the man’s name as a “threat” to “dox” him.

Essentially, CNN is now functioning as a mafia boss enforcer, fulfilling the “journo-terrorism” label I gave the network back in 2016. Here at Natural News, we’ve called CNN’s tactics weaponized journalism. That’s especially ironic, given that CNN absurdly claims President Trump’s tweets against CNN’s fake news will somehow result in journalists being targeted and killed around the world.

Via the Daily Caller:

“Trump was bad. CNN is worse: CNN threatens amateur satirist behind Trump video: make fun of us again and we dox you,” WikiLeaks wrote on Twitter.

“I can’t emphasize how bad this is on CNN’s part,” wrote German Lopez, a reporter for liberal website Vox. “This is basically ‘don’t post stuff we don’t like or we’ll dox you.’ Extremely unethical.”

“That’s essentially blackmail. That’s CNN stating that it will out the guy if he dares to defy their political perspective or offends them sufficiently,” wrote conservative commentator Ben Shapiro. “The whole story is frightening, and obviously an attempt to both nail Trump and discourage people from smacking CNN.”

Others leveled similar criticisms at CNN for the piece, with many using the hashtag #CNNBlackmail, which quickly became the top trending hashtag on Twitter.

The history books will show that on #july4th2017 CNN blackmailed someone who made a joke gif about them. #CNNBlackmail

The internet has responded to CNN’s blackmail threat by creating a huge number of new video memes showing Donald Trump giving CNN a well-deserved beat down across a variety of mixed martial arts and sporting activities: