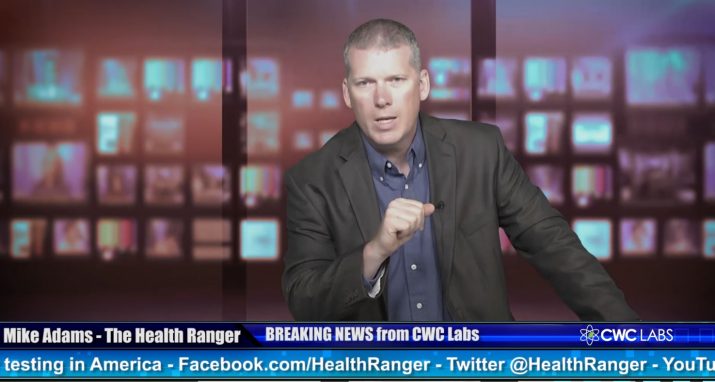 Part of my job is to scan the breaking news each day, and as I do that now, I can’t help but see this country ripping itself apart from runaway hatred, media lies and escalating violence breaking out with increasing frequency.

It’s all gone way too far, and as I’ve repeatedly warned, it’s plunging us into an outcome none of us want: Civil war and open warfare in the streets.

It’s crystal clear now that the media is deliberately whipping up hatred and trying to maximize the political gain from every chaotic event in order to cast blame solely on the so-called “Alt-Right” while utterly ignoring the radical terrorism and violence of the “Alt-Left.”

That’s why I think it’s important to go on the record and encourage all of us to universally denounce extremism, hatred and violence in all its forms. Both the Alt-Right and Alt-Left must be rejected by all of us who demand peace for our nation. We must not allow the extremists and haters to control the narrative that leads this country down the path of domestic terrorism and domestic war.

At the same time, I’m also denouncing the censorship and totalitarianism of the intolerant left-leaning techno tyrants: Google, Facebook, YouTube and Twitter. Each of these internet gatekeepers is now engaged in a direct assault on the First Amendment by selectively censorship, demonetizing or banning entire websites merely for engaging in speech they don’t like. At the same time, none of these organizations are banning radical Left-wing terrorist websites, not even the “Redneck Revolt” site that promotes downloads of how-to guides for bombing buildings and executing civilians. Somehow, the Left has full tolerance for it’s own brand of extremism but shows zero tolerance for rational, logical debate and public discourse from alternative points of view.

We are entering a very dangerous time in history, with signs that echo the totalitarianism of the Third Reich and the mass murder carried out during Mao’s Cultural Revolution. In the name of “diversity,” the Left demands conformity. In the name of fighting racism, the Left declares people of white skin to be inherently evil (i.e. “born evil” by the fact that their skin lacks color). In the name of “equality,” the Left treats certain people with preference, thereby contradicting the very definition of equality and fairness.

Most alarmingly, the Left demands absolute obedience and conformity to its narratives, including the biggest lie of all which claims that any who oppose the Left are automatically racists, bigots and KKK members. This intellectually dishonest leap is, of course, necessary for totalitarian Leftists to tell themselves they are “protecting society from hatred.” It also makes it a simple matter to silence all your political enemies: Simply label them promoters of “hate speech” and use that justification to ban their websites and social media pages forever, all while patting yourself on the back for being on the side of “social justice.” But is it really justice when all you’ve accomplished is exactly the same kind of intolerance and tyranny that Adolf Hitler practiced in his own quest to eliminate an entire culture he wanted to destroy?

The wholesale banning of all dissenting views can never lead to a diversity of ideas nor a peaceful coexistence. For one side to say, “We can all live in peace but only if you are silenced forever” is not a sustainable solution to public debate. The Left, in fact, sees debate as abhorrent. They don’t want to discuss anything of merit, and evidence, facts and opposing views are systematically rejected when they don’t support the Left’s assumed biases. Thus, silencing all dissenting voices has become the “coexistence” strategy of an intolerant Left which deludes itself into believing it is rooted in “inclusiveness,” even when its own actions scream out, “Exclusionists!”

In effect, as I have explained in this podcast, Leftists are proving they are not qualified to participate in a free society. They do not honor “inclusiveness” or a true diversity of ideas. They judge people based solely on the color of their skin, acting out the very bigotry they claim to despise. They are utterly intolerant of all ideas that contradict their own biases, pretending that only Leftists have unique access to absolute truth that is somehow blessed upon them while being mysteriously denied to others. You cannot possibly be speaking the truth, they have concluded, unless you speak THEIR truth, because their truth is not merely absolute; it is such a pillar of their belief system that any who refuse to worship those ideas must be silenced or killed. Again, this is all carried out in the name of “tolerance” and “diversity” and “inclusiveness,” making a mockery of all three terms.

On top of all that, the Left is wildly ignorant of history to the point of illiteracy. As explained by The Burning Platform:

Illegally pulling down statues of Confederate soldiers and taking videos of “brave” unemployed liberal arts major social justice warriors kicking the Confederate soldier is what passes for activism in today’s warped society. Liberal mayors and city councils across the south are falling all over themselves wasting time and taxpayer money to remove statues of Confederate generals to appease the left and make a display of how anti-racist they can be. Meanwhile, their cities are bankrupt, their infrastructure is decaying, black crime is rampant and their education systems matriculate functionally illiterate deranged snowflakes into society.

As the Leftist-run cities are collapsing into economic, social and cultural ruin, the Left wields its anger and hatred as weapons to silence others, oppress people based on the color of their skin, and rile up hatred and violence against their political enemies. Instead of denouncing intolerant fundamentalists, Leftism has itself become a kind of religious fundamentalism, but without a God. The fanaticism of the Left mirrors that of a band of militants from a country like Turkey, where religious fundamentalism controls all sectors of society, including government, technology, medicine and the economy. That is the goal, of course, for the Left in America today: Absolute control over elections, the media, education, the economy and of course all websites. Hence the censorship of Google, Facebook, YouTube and Twitter, all of which openly and selectively silence very reasonable voices that publish ideas which contradict the godless religious fundamentalism of the intolerant Left.

As Ann Coulter correctly observes in this Breitbart.com piece:

Apparently, as long as violent leftists label their victims “fascists,” they are free to set fires, smash windows and beat civilians bloody. No police officer will stop them. They have carte blanche to physically assault anyone they disapprove of, including Charles Murray, Heather Mac Donald, Ben Shapiro, me, and Milo Yiannopoulos, as well as anyone who wanted to hear us speak.

TWISTED: Censorship is freedom, oppression is diversity, violence is peace

As should be obvious from what I’ve written so far, I denounce censorship, totalitarianism, oppression, intolerance, racism and stupidity. Yet almost everything in the popular culture today seems rooted in precisely those deplorable traits. What’s more disturbing to me than the fact that such things exist is that they are all pursued under the delusional banner of “inclusiveness” and “tolerance.” Somehow, the Left has convinced itself that censorship is freedom. Oppression is diversity. Violence is peace.

If this all sounds familiar, it’s because George Orwell wrote similarly:

War is peace.
Freedom is slavery.
Ignorance is strength.

And this is precisely what the Left has come to follow today. They are operating out of the George Orwell playbook with striking precision, even while strangely believing they are the anti-fascists. They should look in the mirror…

I even wrote about this in February of this year, encapsulating the self-contradicting philosophy of the deranged Left in this Natural News article entitled, The new liberal philosophy explained: HATRED is tolerance; conformity is diversity; consensus is fact.

Frankly, until the Left awakens from its delusional slumber and comes to its senses about what “diversity” and “tolerance” really mean, America can never have a truly genuine dialog about the cultural and political differences that paint the mosaic fabric of this nation. Both Alt-Right and Alt-Left sh#tbags need to be resoundingly rejected by everyone, but even after that’s done, the Left needs to drop its totalitarianism conformity demands and realize that “coexistence” requires listening to someone other than the members of your own echo chamber.

Otherwise, we cannot achieve any sort of “peace” in this society, and the quest for freedom is lost. From what I’m witnessing right now, it’s the reason-based conservative and libertarian voices that are logical, informed and evidence-based, while the voices on the Left seem rooted in intolerance, bigotry, racism and stupidity. I hope that changes, of course. I wish all Leftists were like Noam Chomsky — intelligent, informed and willing and able to back up their views with evidence while engaging in informed debate. I also wish all Right-leaning people were more like Stefan Molyneaux — intelligent, informed, philosophically aware and very articulate. We need to debate ideas using reason, evidence and the fundamentals of logic.

But that’s not the world in which we live, sadly. Instead, we get to deal with Antifa and the KKK… Redneck Revolt and White Supremecists. Is it just me, or are you tired of the extremists running around the cities of our country, acting like they rule the place? It’s time for the adults in the room to take back this country, restore reason and rationality and end the stupidity, hatred, bigotry and censorship that’s now plunging us all toward civil war. Maybe one day soon I’ll be able to change my conclusion and say, “Now that Leftists have dropped their censorship assault, we can return to public debate rooted in reason.”

But until then, the Leftists dominating society today are a scourge on freedom, liberty and peace for all. They are far more dangerous to the future of our society (and our liberty) than any conservative voice, by the way. The mindless liberal mob is a clear danger to the future of this nation. Listen to my podcast to learn more: