Another day, another round of ALT-LEFT violence in Berkeley… against OTHER Left-wingers 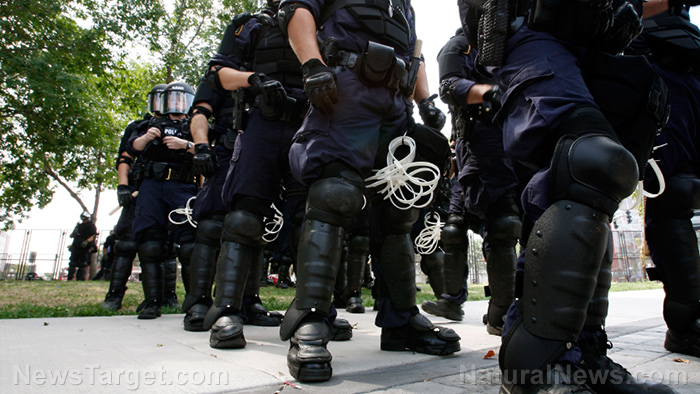 If you still believe that “anti-fascist” members of the Alt-Left group Antifa are largely harmless people who are just trying to ‘make a difference in the world’ by ‘opposing hate,’ I’ve got some beachfront property in Kansas to sell you.

In no way, shape, or form are Antifa thugs non-violent. The group exists to create mayhem, to make America ungovernable, and to violently oppose anyone they disagree with.

Even if they happen to agree with Antifa’s stated position of opposing hate.

As reported by The Daily Caller, members of Antifa, along with some who were associated with the Democratic Socialists of America, descended on the Martin Luther King Jr. Civic Center Park in the city over the weekend to disrupt a “March Against Marxism” event that never even took place.

Black-clad belligerents carrying red flags reportedly assaulted bystanders and turned their ire on largely passive police officers who were standing by to monitor the situation. Many participants called for the overthrow of the U.S. government. Some carried rainbow banners with recent tweets by Chelsea Manning like “We Got This.”

‘Chelsea,’ you may remember, is formerly Bradley Manning, the former U.S. Army traitor who stole sensitive U.S. intelligence and turned it over to Wikileaks. What a ‘role model.’

Anyway, the March Against Marxism was supposed to be a protest against — wait for it — Marxism, but was not in any way associated with any “Alt-Right” groups or ideology. Nevertheless, it was canceled after another Left-wing hate group, By Any Means Necessary, or BAMN, threatened to use violence to disrupt the march.

The far-Left group claimed that the march was a “neo-Nazi” event, but it was actually organized by a transgender woman and other Americans who simply disagree with the creeping Marxism in our society (especially in California). But despite the fact the march was canceled, some showed up anyway to interact with Antifa members, and were assaulted for their effort.

“Footage of the violence on Sunday erupted on social media after a mob of Antifa overran a small group of protesters. Police were reportedly issued the order to stand down and retreated and the situation only escalated from there,” The Daily Caller reported (which makes you wonder why the local department even bothers to send officers in the first place).

In videos posted to social media, Antifa thugs can be seen ganging up on single victims like cowards, claiming they were “Alt-Right” — even though a) there were no indications at all these victims were “Alt-Right;” and b) even if they were, what gives anyone the right to attack them just for voicing an opinion?

Even journalists covering the event were targeted; thugs can be seen and heard shouting at them, “Take his camera! Take his phone!” One was a local Fox affiliate.

Even some Left-wingers traded punches with Antifa thugs in an effort to keep them from seriously injuring others. (Related: White House petition demanding Antifa be labeled a terrorist group surpasses 200k signatures.)

Just like we’re often told that “Islam is the religion of peace,” we’re being told by goofball politicos and insane Democratic politicians that “Antifa is a movement of peace” when over and over again we can clearly see that they aren’t. Still, were told to ignore our eyes and ears and common sense, disbelieving what we see and hear what these fools say and do.

Interestingly, the so-called “mainstream” media is even starting to portray Antifa thugs in an honest light. As Zero Hedge documented Monday, outlets like The Associated Press and the Washington Post accurately portrayed Berkeley’s Antifa thugs as being “violent” and even starting the violence this past weekend.

It’s about time that extremism and hate in any form practiced by any group be exposed for what it is.