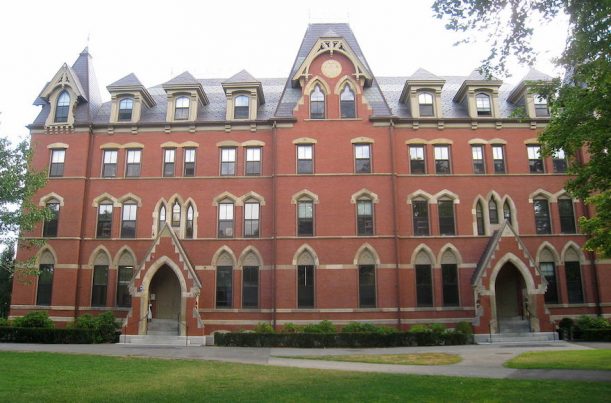 Racism, bigotry, and intolerance are all okay as long as you’re a Left-wing extremist who has pledged allegiance to the Democratic Party. Now we can add anti-Semitism to the list, at least as it pertains to one college.

As reported by Campus Reform, a group of students at Tufts University in Massachusetts — which was founded in 1852 as Tufts College by Christian Universalists (a theology which teaches that all humans will ultimately be restored to a right relationship with God) — have deemed everyone in Israel a “white supremacist.”

Why? Because Israel is a “white supremacist state,” they claim.

Why? Well because, Israel perpetuates “apartheid” against Palestinians.

As far as the American Left is concerned, everyone but Israelis has a right to exist, apparently.

Campus Reform noted that the designation was contained in a “Tufts Disorientation Guide” that is handed out to incoming freshmen. In it, distributing students took aim at Tufts University Hillel as a group that supports the “white supremacist state.”

In addition, the guide — the link to the original Campus Reform story went to an error page — also accuses Hillel of “exploiting Black voices” after inviting the parents of Trayvon Martin to discuss the effects of “gun violence” to students at the school.

So because the self-anointed little haters who put together the “Disorientation Guide” have deemed Hillel to be bad, everything the organization does is suspect. Got it.

The guide makes a point to praise several other campus groups, with the pro-Israel Hillel singled out for particular hate, even mentioning that pro-Palestinian students have started a chapter of Students for Justice in Palestine (SJP) to counter Hillel messaging.

In a bid to convince incoming freshmen to avoid seeking membership in Hillel, the guide suggests “alternative” communities — including, as you might have guessed, the SJP — for Jewish students who want to remain “critical of Zionism and Israel.”

Fortunately, not all Tufts University students have been sucked in by this hate document. Sabina Miller, a Tufts sophomore who attends Hillel-sponsored services, told Campus Reform she wasn’t happy how the guide portrays the organization. She said that not only was the designation “ridiculous but also offensive and ignorant.”

Yes, the guide is definitely all those things. And hypocritical as well; let’s not forget that one.

Miller noted further that “far-Left liberals often forget that Jews, especially Israel-supporting Jews, are targets of white supremacy,” and as such calling Hillel a “white supremacist” organization is “especially ignorant.”

She also defended Hillel, noting the organization is “not racist at all” but rather “open to people of all races, sexualities, even religions.” (Related: University study confirms that most minorities have NEVER experienced discrimination of any kind.)

You know, everything the purveyors of hate who came up with the guide probably claim to be, but obviously aren’t.

Miller said she personally had nothing to do with the invite of Trayvon Martin’s parents but opined that it had nothing at all to do with exploitation. Instead, she said it was most likely “a chance to learn and support a diverse community.”

Sophie Saunders, also a Tufts sophomore who is involved with Hillel, said the organization is “inclusive to everyone.”

“I think to be honest that Hillel is based more around being a welcome community for students at Tufts than it is meant to be a political or conservative Jewish community,” she noted further, adding, “Anyone should feel welcome at Hillel and I think they would if they stopped by.”

“We have been working so hard to create a positive atmosphere on campus, and we have such a positive Israel presence,” he told the Jewish Telegraphic Agency in an interview. He also said about 100 Tufts students travel every year to Israel.

There is hate, intolerance, bigotry, and racism in America — it is alive and well among the Marxist Left on our college and university campuses.